Buchwald Leaves Assembly Having Worked on Issues Large and Small

From the time David Buchwald arrived in Albany as the representative for the 93rd Assembly District, he periodically found himself involved in some fairly high-profile issues.

Buchwald’s first vote as a state lawmaker on the first day of the 2013 legislative session was to support the NY SAFE Act, sweeping gun violence legislation the month after the Sandy Hook Elementary School shooting.

He also came into office about two months after Superstorm Sandy ravaged the region, the start of an ongoing saga where legislators have battled the utilities for a more coherent response after weather-related emergencies. He would later help found and co-chair United Westchester, a group of local, county, state and federal officials that have formulated recommendations on how utilities can respond more effectively.

During his eight years as a state legislator, Buchwald also received attention for his successful push to have a state constitutional amendment for pension forfeiture if state officials were found guilty of a crime connected to their jobs and writing legislation enabling Congress to have access to state tax returns of top elected officials, including President Trump…. 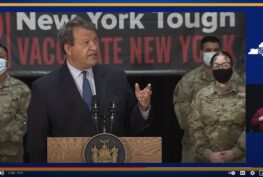