2021 Convention Wrap-up – Westchester County Democratic Committee
Home / Uncategorized / 2021 Convention Wrap-up
Congratulations to George Latimer on his endorsement for a second term as Westchester County Executive at last night’s Westchester County Democratic Committee convention. (It was nearly unanimous—with ten abstentions and six write-ins—but two of those were for George, one blank, two for the voter casting the vote, and one for another elected official.)
And to County Clerk Tim Idoni, on his overwhelming endorsement for another four-year term. Tim won 98.56% of the weighted vote (980 district leaders vote for Tim, with 17 abstentions and 22 write-ins.) Shanae Williams opted yesterday not to place her name in nomination.
And kudos to our “multi-jurisdictional” Democratic Legislators—Colin Smith, Vedat Gashi, Nancy Barr, Catherine Parker, Catherine Borgia, Alfreda Williams, Damon Maher, Terry Clements, David Tubiolo, and Ruth Walter—on their presentations and endorsements.
Thanks to our production team, Executive Director Jovan Richards, Secretary Tajian Nelson, and Harrison Chair Frank Corvino, with invaluable contributions from Alex Acaro (on the video) and TJ Rogers, and Megan Glander and Andy Buder on the HelpDesk.
And to the more than 1,000 district leaders in attendance (virtually) and the 300 plus who participated by proxy.
We’ll be posting in the coming days the greetings from Majority Leader Schumer offered last night and the 90-second videos of our judicial hopefuls and other highlights.
Petitions start March 2! Look for information on that next week. Meanwhile enjoy the holiday weekend and stay safe.
Suzanne
Suzanne Berger, Chair
Westchester County Democratic Committee
Peekskill Dems Nominate McKenzie 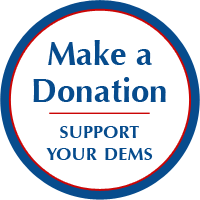