News from the Tuckahoe Vote Count 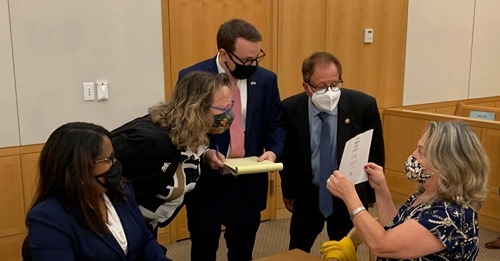 by wcdc2 in Uncategorized

Judge: Delayed village election rules out votes of the dead

It turns out the dead can’t vote, but in a White Plains courtroom on Monday, they figured into a tiny election case that might have provided a glimpse of the future, one filled with lawyers leaning in to examine ballots in great detail, keeping tallies, scribbling notes on legal pads.

With their untallied absentee ballots still at the Westchester County Board of Elections, Picconi died at 97 on April 27 and Rusnak died at 102 on June 5.

They might have been gone, but their votes were not forgotten after Tuckahoe voters went to the polls on Sept. 15 to chose from among four candidates for two open seats on the village board. On the ballot were the incumbents, Republican Danny Lang and Democrat Omayra Andino, Republican Bert Baldassarra and Democrat Cara Kronen….